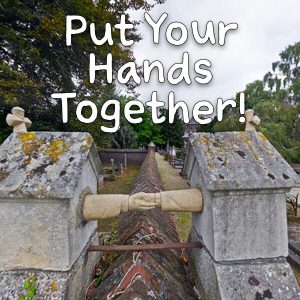 Our message this week from Pastor Kevin builds upon the recent theme of Jesus as the Bread of Life. We will consider Paul’s advice to citizens in Ephesus about using language that lifts people up in love, and do everything we can to put our hands together to ensure that everyone experiences that love. Take a look at the photo above of two clasped hands across a wall separating the Protestant graveyard from the Roman Catholic graveyard in Holland. In 1880, Colonel van Gorkum died in Roermond, Holland, and was buried in the Protestant cemetery because even though his wife Lady van Aefferden was Catholic, neither could be buried together. A few years later she died, but instead of being buried in her family plot, she chose a secluded spot at the wall that separated the Protestants from the Catholics and commissioned some clasped hands to connect with her husband’s tombstone to her’s symbolizing their love and togetherness. Language matters and how we think and how we speak to each other has profound consequences. Let’s speak to each other with love and in dignity and respect. With communion between Protestants and Roman Catholics remaining “closed,” this photo is a powerful symbol both of how far we’ve come and how far we have to go to put our hands together.

Our cemetery and our worship have always been and remain open to people of any faith, or no faith at all, because we believe God’s spiritual energy is accessible through Christ to everyone. Get more out of your life, and gain resources to help you put more into your life!

Let’s let love lift us with friendly smiles, special music, conversation, prayer, and a message of Gospel hope. All this and so much more this Sunday, August 12.

“The earth is degenerating. Bribery and corrupt speech and deeds abound. The end of the world is fast approaching.”

Contempt cannot drive out contempt. Only empathy can do that.

We don’t have an anger problem in our communities, according to clinical psychologist John Gottman and thinker Arthur Brooks, we have a contempt problem. And we can fix it! We can put our hands and hearts together!