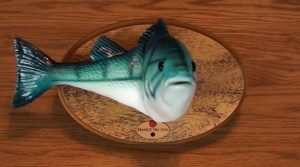 Have you seen the new McDonald’s Filet-O-Fish commercial? This humorous ad features a toy mechanical fish mounted on a wall who sings, “Gimme that fish, O Gimme that fish…” announcing the return of the Filet-O-Fish sandwich. Have you ever wondered why the Filet-O-Fish Sandwich is so heavily promoted the same time every year? Hint: The special fish promotion always occurs during the 40 days of Lent. That’s right. It all started in a predominately Catholic neighborhood in Ohio when, in 1959, a McDonald’s franchise owner named Lou Groen noticed plummeting hamburger sales every Lenten season. Instead of just suffering through the 80% drop in sales, he decided to meet the needs of his customers by developing a non-meat alternative. The incredible success in delivering what his community needed is, as they say, history.

What does the Filet-O-Fish have to do with Jesus’ words about the fig tree from our text this week from Luke 13? As we will discover during this Sunday’s message titled, “Fish, Fig, Discipleship” the origin story of this popular sandwich can teach us a lot about our mission. You see, the fig tree Jesus spoke about was not producing the fruit the other crops needed, nothing for three years. But, instead of destroying the barren fig tree, the owner agreed to let the fig tree have one more year to deliver what was needed.

We know figs are remain a very popular fruit in the United States, but did you know that it was the abundant vitamins found in figs that motivated a Philadelphia baker in 1851 to produce a machine that could stuff the nutrient rich fig jam into pastry dough. Delivering what the community needed led a baking company to buy the machine and the cookies were a huge success. The town they were first produced was, you guessed it, Newton, Massachusetts!

Fish and figs can teach us a lot about discipleship as we follow Jesus during lent as we deliver spiritual nutrients our neighbors need.