This week is the perfect time to join in our worship online. We simplified our online service and made it even easier to participate, and viewing does not require a Facebook account! Join the video stream on Facebook Live (www.facebook.com/coldspringchurch) or, if you don’t have internet access, use our New call in number: +1 (929) 205-6099. Enter Meeting ID: 875 2479 7260. Password: 278951. 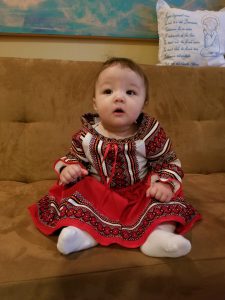 The world in our home! Share a photo of items or products displaying words in a language other than your “first” language, or made in a country other than your country of birth. Or, share a photo of a place you visited on vacation or a trip away from home.
(Photo:  Baby Avery in her Romanian attire with a Romanian prayer in the background on her pillow)

You have found a place to encounter God and people who care about you – just as you are, right where you are, anytime. Once you and your family are ready, share the picture with us by posting to Facebook #ColdSpringChurch or Instagram #coldspringchurchnj. You may want to subscribe to our weekly Connections email newsletter. Sign up here! 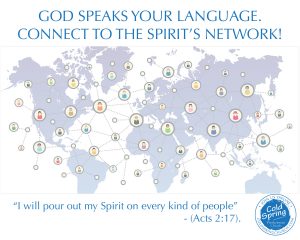 Numbers 11:24-34 (MSG)
So Moses went out and told the people what God had said. He called together seventy of the leaders and had them stand around the Tent. God came down in a cloud and spoke to Moses and took some of the Spirit that was on him and put it on the seventy leaders. When the Spirit rested on them they prophesied. But they didn’t continue; it was a onetime event. Meanwhile two men, Eldad and Medad, had stayed in the camp. They were listed as leaders but they didn’t leave camp to go to the Tent. Still, the Spirit also rested on them and they prophesied in the camp. A young man ran and told Moses, “Eldad and Medad are prophesying in the camp!” Joshua son of Nun, who had been Moses’ right-hand man since his youth, said, “Moses, master! Stop them!” But Moses said, “Are you jealous for me? Would that all God’s people were prophets. Would that God would put his Spirit on all of them.”

Connect To the Spirit’s Network

When the Feast of Pentecost came, they were all together in one place. Without warning there was a sound like a strong wind, gale force—no one could tell where it came from. It filled the whole building. Then, like a wildfire, the Holy Spirit spread through their ranks, and they started speaking in a number of different languages as the Spirit prompted them.

There were many Jews staying in Jerusalem just then, devout pilgrims from all over the world. When they heard the sound, they came on the run. Then when they heard, one after another, their own mother tongues being spoken, they were thunderstruck. They couldn’t for the life of them figure out what was going on, and kept saying, “Aren’t these all Galileans? How come we’re hearing them talk in our various mother tongues?

Parthians, Medes, and Elamites; Visitors from Mesopotamia, Judea, and Cappadocia, Pontus and Asia, Phrygia and Pamphylia, Egypt and the parts of Libya belonging to Cyrene; Immigrants from Rome, both Jews and proselytes; Even Cretans and Arabs!

“They’re speaking our languages, describing God’s mighty works!” Their heads were spinning; they couldn’t make head or tail of any of it. They talked back and forth, confused: “What’s going on here?” Others joked, “They’re drunk on cheap wine.”
That’s when Peter stood up and, backed by the other eleven, spoke out with bold urgency: “Fellow Jews, all of you who are visiting Jerusalem, listen carefully and get this story straight. These people aren’t drunk as some of you suspect. They haven’t had time to get drunk—it’s only nine o’clock in the morning. This is what the prophet Joel announced would happen:

“In the Last Days,” God says,
“I will pour out my Spirit on every kind of people:
Your sons will prophesy, also your daughters;
Your young men will see visions, your old men dream dreams.
When the time comes, I’ll pour out my Spirit
On those who serve me, men and women both, and they’ll prophesy.
I’ll set wonders in the sky above and signs on the earth below,
Blood and fire and billowing smoke, the sun turning black and the moon blood-red,
Before the Day of the Lord arrives, the Day tremendous and marvelous;
And whoever calls out for help to me, God, will be saved.”